You are here:
drone news 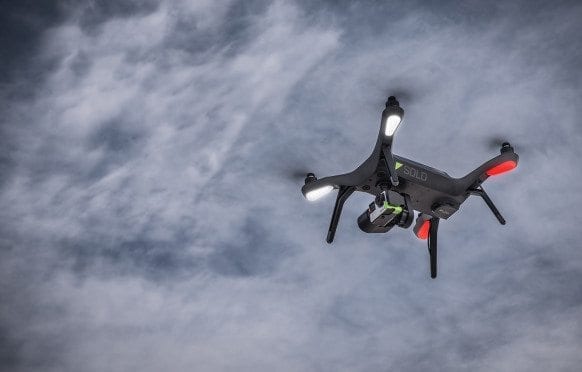 PARKER GYOKERES KNOWS what he’s doing with a drone. A retired US Air Force photojournalist, Gyokeres now runs his own aerial photography business, and has flown photo and video missions for clients as varied as Wu-Tang Clan, the Department of Defense, and Nike.

But once in a while, Gyokeres’s DJI Inspire drone won’t take off. There’s nothing wrong with the UAV, and there’s nothing he can do about it. It’s the work of built-in geofencing software, invisible guardrails that stop pilots straying into restricted areas—mostly no-fly zones like airports, but also entire cities like Washington, DC, public areas like Tiananmen Square, and, apparently, decommissioned blimp bases.

“I went to a job in Massachusetts, and I went to arm the vehicle, and it wouldn’t arm because it was on the perimeter of an abandoned Navy airfield.” Gyokeres says. Naval Air Station South Weymouth in Abington, Massachusetts—a former Navy airfield that served as the home of blimp squadron ZP-11 during World War II—hasn’t been in operation since 1997. Still, the “No Fly Zone” feature in DJI’s A2 Flight Controller system had it tagged as off-limits. And because the system’s no-fly zones are hooked up to a geofencing system, Gyokeres’ mission was auto-grounded. That canceled flight is a good example of how drone geofencing systems work, and where they can cause problems.

In these early days of the drone craze, automated geofencing systems have been put in place by manufacturers including 3D Robotics, DJI, and Yuneec to curb reckless flying. In the most basic sense, geofencing can prevent a drone from taking off or entering restricted airspace based on its GPS coordinates. Geofencing is appealing because recent history shows drone pilots can’t be trusted to stay out of trouble. Drones have interfered with firefighting operations, been spotted by airline pilots around airports, and even crash-landed on the White House lawn. (That last one led to a blanket ban on flying drones in the nation’s capital.)

And with drones quickly filling our skies—the FAA predicted a million would be sold last holiday season alone, and the civilian UAV market could be worth nearly $4 billion in less than a decade—finding a way to make sure they all behave responsibly is increasingly important.

While it’s understandable that drone manufacturers and regulators want to err on the side of caution in terms of safety, these early geofencing systems are prone to errors and confusion. “These things aren’t necessarily bad, because the market isn’t mature at this point,” says Gartner research director Brian Blau. “The devices are only in their infancy, and we’re confident that over the years, some of these issues are going to get worked out—specifically around no-fly zones.”

That resolution may come very soon. In the next year or two, geofencing systems in many high-end drones will get more accurate, more dynamic, and more communicative. They’ll also start to work with lower-end drones—machines that don’t even have GPS. Down the line, geofencing systems could also help power safe autonomous flight, paving the way for those delivery drones Amazon and Google really want to deploy.

The Problems With Current Geofencing Systems

Most early systems, such as the DJI “No Fly Zone” feature that launched in 2013, were developed by the manufacturers themselves. And while it was relatively easy for these companies to hard-code no-fly zones into drone software based on areas that are always restricted (like airports and the White House), it’s harder to keep drones consistently updated with new and changing restrictions. The FAA is constantly setting up temporary no-go zones: airspace over live sporting events, wildfires, presidential motorcades, things like that. Not only did primitive geofencing systems spit out false positives like that old blimp base, they wouldn’t know anything about newly closed areas.

Another hiccup: Right now, geofencing systems are only found in higher-end “prosumer” drones, ones that require substantial skill (and money) to operate. Their pilots tend to be professionals, often with FAA permission to uses drones for commercial purposes like aerial photography, videography, and cinematography. These are the folks who tend to be most aware of airspace restrictions and the nuances of flying responsibly. Meanwhile, geofencing systems don’t come with cheaper, toy-like drones, whose controls are more likely to be in the hands of kids or inexperienced operators. In other words, these geofencing systems can limit the very pilots who are more likely to fly responsibly.

It’s worth noting, though, that these systems aren’t intended to be the end-all, be-all of drone safety. Geofencing is supposed to help, not to be relied upon. “It’s a last resort,” says Gyokeres. “If the drone is shutting itself off, I have bigger problems. That means I’m not paying attention to where I am and what’s going on around me.”

The FAA agrees. It acknowledges the value of building flight restrictions into drone software, but wants drone pilots to take responsibility for their actions. And while no-fly-zone data is based on its official restrictions, the FAA doesn’t endorse any particular geofencing system (it suggests using its apps and resources instead, to be sure you’re getting the most accurate info). “An aircraft operator, whether the aircraft is manned or unmanned, is responsible for knowing the rules and flying safely and responsibly at all times,” a spokesperson says.

Despite the FAA’s tepid interest, a Santa Monica-based company called AirMap wants to help advance the entire idea of drone mapping. It’s playing a major role in the next-generation geofencing systems used by DJI and 3D Robotics. DJI’s AirMap-powered DJI GEO system is currently available as a public beta, while 3D Robotics has a closed beta of its Solo app with AirMap’s service built in.

AirMap, which launched less than a year ago, wants to do more than just provide drone maps. Its ultimate goal is to become an automated mission control for a world of drones.

These “unpublished TFRs” usually apply to sporting events in stadiums that seat 30,000 people or more; the FAA doesn’t list all those off-limits sporting event in its official notices. The ways a UAV reacts to encountering a no-fly zone—automatically landing, or just warning the pilot—is up to the individual manufacturer.

A second advantage for AirMap: Its information meets the standards that apply to data systems used by airline pilots. “It’s called a DO-200A certification standard,” McNeal says. “When you’re dealing with flight safety, you can’t rely on crowdsourced or open-source information.”

That doesn’t mean no one can send a geofenced drone into a no-fly zone. DJI’s GEO system keeps things like the airspace above prisons permanently locked, but lets users with verified accounts request permission to bypass some flight limits. “In a wildfire area, we want to help keep drones from interfering, but we also want to enable firefighters to use drones to do their job more safely and effectively,” says Brendan Schulman, DJI’s head of policy and legal affairs. “The verified account provides a measure of accountability in the event that something happens that later warrants an investigation by authorities.”

The Future of Geofencing Systems

In terms of drone safety and pilot awareness, smarter geofencing systems are just the first step toward a more secure airspace. The FAA, pilots, and drone manufacturers all tend to agree that if more and more drones are taking to the sky, there needs to be a communication system that makes sure they’re buzzing around in a reasonable and responsible manner.

Accurate and up-to-date airspace information is just part of that puzzle, according to Gyokeres. He envisions a near-term future with a seamless flow of data between drones, airline pilots, and local and federal agencies. “My vision for the future, I think this could work,” Gyokeres says. “Before I leave I’m going to file my flight plan on my phone to the FAA. I’m going to give them my pilot number, where I’m going to fly, how I’m going to fly. Then I’m going to get out there, turn on the drone, and the drone is going to talk to the airspace system. It’ll say ‘this is an autonomous UAV at this height, at this distance, in this location.” Ultimately, it’s about communication. “I think a lot of the problem is that the FAA doesn’t know what the hell we’re up to.”

AirMap’s longer-term plans dovetail with that vision. McNeal says increased pilot awareness, the goal of its current technology, is just the first step. He says AirMap is already thinking about communication and centralized control systems. Those are important components for manned and unmanned vehicles to coexist safely—and somewhat autonomously.

“The operator is going to be aware of the airspace around them, but why not empower them with technology to communicate their location?” McNeal says. “The ability for the drone to communicate its location to airports or to manned aviation vehicles. To be able to say ‘Here I am, watch out’ as opposed to depending solely on the operator to not take off. And then eventually, five or ten years down the road, is the control part.”

That’s where a NASA project comes in. The space agency’s working with Stanford scientists and some private companies to build an unmanned traffic management system for drones. It will tackle communication between drones to avoid collisions and help manage air traffic, because the UAV delivery systems many have in mind will need more than dedicated shipping lanes. McNeal says that because environmental and physical conditions in the sky are always in flux, you’d need powerful computers to create dynamic routes accounting for changes. “Traveling from point A to point B today at 150 feet of altitude might make sense but not tomorrow, because the county fair showed up and now there’s a ferris wheel there,” McNeal says.

But it’s not all about building an aerial infrastructure for Google and Amazon. McNeal says AirMaps is talking with several smaller drone manufacturers who want the company’s safety features. These cheaper drones don’t all feature GPS, but could use a smartphone as a tethered source for airspace information.

So while the next stage of drone management is deep in the development phase, you can rest assured that toy drones, prosumer drones, and commercial drones will all be much smarter in the near future. The bigger hurdle is making sure they talk to each other.