Walmart Drone Delivery: Investment in DroneUp Could Change the Race to Dominate the Last Mile

You are here:
Drone News 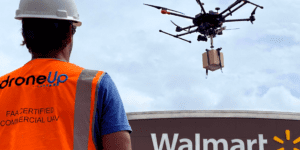 “Conducting drone deliveries at scale is within reach. DroneUp’s expertise, combined with our retail footprint and proven history of logistics innovation, puts us right where we want to be for that day,” writes Walmart President and CEO John Furner. “Because when it comes to the future of drone delivery, we know the sky’s the limit.”

DroneUp has long been an industry leader: providing a well-trained pilot force, defining the boundaries of what can be accomplished within the limits of Part 107, and offering drone delivery as a regular part of their services.   They’ve partnered with Walmart on drone delivery before, delivering COVID-19 test kits by drone to residences in the dense urban environment of Las Vegas and a new Coca-Cola product in Georgia. Now, by investing in DroneUp as delivery partners, Walmart has made a move that could define what retail drone delivery looks like.

Over the course of the last few years, Amazon, Google and Walmart have emerged as the major players working towards residential drone delivery.  Amazon was one of the first to appear at drone industry events, explaining their concept of a federated airspace model for drone regulations in 2016, and investing heavily in government lobbying from 2014.  Throughout the process, they’ve focused on developing their own proprietary aircraft: working through multiple designs and the extensive testing required by aircraft development.

The project has been a huge investment and has successfully garnered significant support for drone delivery: but developing aircraft is undoubtedly outside of Amazon’s core business.   Companies like Amazon and Google may have been forced into aircraft development simply by being such early adopters of drone technology: while they have no part in the production of other delivery methods like trucks and manned aircraft, suitable delivery drones manufactured at scale were not readily available when companies began to think ahead to the benefits of drone technology.  It was only last year, in 2020, that Amazon’s PrimeAir fleet received FAA approval, however.

While drones offer the opportunity for same hour delivery, they do have limitations in distance.  For Amazon, that could require an entirely new supply chain organization: new warehouses or entirely new workflows.  Over the years, Amazon has patented many different ideas to deal with these problems: airborne satellite warehouses, drone docking systems on trains, charging stations on streetlights.  Still, for Amazon, bringing the supply closer to the customer remains a barrier for drone delivery.

Google is not a retailer, and Google spinoff Wing has taken another approach.  Wing has also developed their own proprietary aircraft: they’re a company devoted to drone delivery and have taken a major role in unmanned traffic management development and regulatory affairs that impact drone delivery.  Wing offers delivery as a service to other retailers, focusing on individual communities rather than on specific retailers in the community, and they stand as the first to develop a retail delivery program and were first to receive a Part 135 certificate from the FAA to operate a commercial drone operation.  They serve everyone from small independent coffee shops to local libraries.  It’s a long-view strategy has been successful in trials to date and has certainly moved drone delivery forward, but it’s a model that will take time to scale.

The Walmart drone delivery program has been different from the beginning (they announced testing programs back in 2015.)  While they have applied for patents to describe new workflows and uses for drone technology, they haven’t invested in building their own aircraft, or in developing their own pilot workforce.  Instead, they’ve worked with independent drone service providers, and been willing to use commercial drones for delivery, generally within the confines of visual line of sight and Part 107 regulations.

Leaving the hardware development and the drone services to specialized solution providers has meant that Walmart has not had to engage in an entirely new industry – they’re simply expanding their core business of providing products to consumers.  Walmart has 4,700 retail stores: 90% of the U.S. population lives within 10 miles of a Walmart.  Walmart already has their supply located next to their customers.  The more “open source” approach, using DroneUp for services and easily available commercial solutions for hardware, means that Walmart is ready to start drone delivery at scale – now.  Without sunk costs in aircraft development, Walmart may well be the first to make retail drone delivery really profitable.

The Walmart announcement says that they will open the first Walmart drone delivery center at a store in their founding state of Arkansas.

DroneUp is a services provider, not a drone manufacturer or software provider.  Over the last several years, DroneUp has made strategic acquisitions, partnerships, and decisions that have cemented their position in the industry.  DroneUp holds a patent on an automated system that allows a central agency to enter a job into a pilot network database, figure out which pilots are local and available, and communicate with them via app – which could be a critical tool in scaling a drone delivery business.  Notably, as DroneUp has continued to grow they’ve used the best commercially available technology for the job, taking a best of breed approach for hardware and delivery mechanisms – flexibility which could prove to be a major advantage in implementing widescale drone programs.

While the company has grown steadily and quickly, and has a robust network of pilots, they will almost certainly be executing an active growth strategy to support the Walmart business.  DroneUp declined to comment on the exact amount of the Walmart investment, but a DroneUp representative did say that the company looks forward to meeting its immediate goals of hiring, partnering, and acquiring the best technology partners in the industry.

The Walmart drone delivery partnership is a win for DroneUp, and progress for the entire industry.  A wide-scale delivery program utilizing solutions from commercial manufacturers will mean more opportunity for the entire drone technology ecosystem.  As drones become prevalent in many of the places where Walmart does business, the American public will begin to enjoy drone technology as a beneficial part of everyday life.

Miriam McNabb is the Editor-in-Chief of DRONELIFE and CEO of JobForDrones, a professional drone services marketplace, and a fascinated observer of the emerging drone industry and the regulatory environment for drones. Miriam has penned over 3,000 articles focused on the commercial drone space and is an international speaker and recognized figure in the industry.  Miriam has a degree from the University of Chicago and over 20 years of experience in high tech sales and marketing for new technologies.
For drone industry consulting or writing, Email Miriam.

AERTEC’s TARSIS 75 adds a new capability that is unique to UAS of its segment in Europe: the laser designator
July 29, 2021
Go to Top